Global AI Talent Flow Report for 2019: About 44% of AI talents in the United States receive a Ph.D.

The latest 2019 Global AI Talent Flow Report shows that approximately 44% of AI talents in the world receive PhDs in the US and PhDs in China. Talents with degrees account for less than 11%, and cultivating more AI doctors does not necessarily benefit the country.

There is a lot of evidence that top AI talent is in short supply. However, how scarce such talents are, or where they are concentrated around the world, is barely known.

Recently, the CEO of Element AI of Canada released the latest 2019 Global AI Talent Flow Report, which will do the number and distribution of AI talents. Summary, it can be said that it is the most comprehensive report at present, mainly collecting three data sources.

Thesis published by 21 major academic conferences in the AI field,Such as AAAI, CVPR, etc., and analyzed the author's summary.

A targeted analysis of LinkedIn search results showing how many people claim to have a Ph.D. and what AI skills are required around the world.

Refer to external reports and other supporting sources to help understand the background and better understand the rapidly changing talent pool in the global artificial intelligence arena.

Reporting results show that in 2018, the number of people who published papers at one or more top conferences in the field of machine learning reached 22,400 People, a 36% increase from 2015, and a 19% increase last year alone. A supplementary survey of personal data on LinkedIn shows that a total of 36,524 people are eligible for AI experts, which is a 66% increase over the 2018 report.

The number of authors who have obtained doctoral degrees in China is close to 11%, ranking second in the world;

More than 11% of AI talents work in China, ranking second among the countries with the most employment;

The top AI researchers have 225 China ranks second in the world in terms of quantity.

The report also presents some valuable ideas and phenomena. For example, cultivating so many AI doctors will not necessarily benefit the country. The total proportion of women in the AI top conference is only 18%, and the gender imbalance is serious.

The following is a detailed report.

Proliferation: The paper rose 30% in three years.The meeting has thousands of authors

Results show that one or more of the above are in 2018 The authors of the papers published at the top meeting were 22,400, which means that there are more than one thousand authors per meeting.

The country of AI researchers Top 5 (Number of authors who published papers at the 21 summits surveyed):

However, among the researchers who published papers at these conferences, the proportion of women was very low, accounting for only 18%. 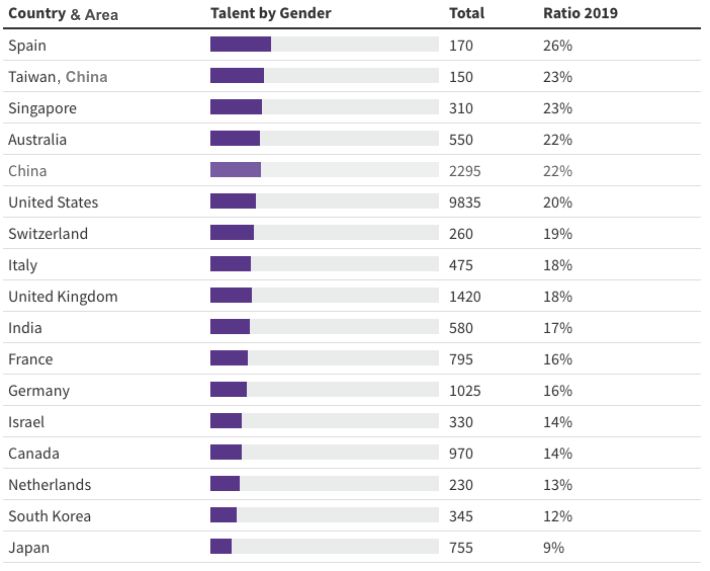 18% of all authors of the 21 meetings surveyed. The proportion of female authors in Spain, Taiwan, and Singapore is the highest, but in absolute terms, female authors in the United States account for almost half.

In the course offered by the University of California at Berkeley, the male ratio is 73%.

The percentage of women taking the introductory course in machine learning is lower, with 76% and 79% of men at Stanford and the University of California at Berkeley, respectively. The same report also found that in the United States, the majority of applicants for AI work were men, accounting for 71%.

In absolute terms, the United States is the country with the largest number of female authors, followed by China, the United Kingdom, Germany, Canada, France, Australia, India, Italy, and Singapore.

Nearly half of the authors of the paper received a doctorate in the United States.Only 11% in China

The data analysis of the authors of the conference papers can also make some observations on where the authors receive education.

Second, the number of authors who have obtained doctoral degrees in China is close to 11%, followed by the United Kingdom (6%), Germany (5%) and Canada, France and Japan (4%).

The survey shows that US employers continue to attract researchers to work, 46% of whom work for US employers; more than 11% work in China and are employed The second highest number of countries, followed by the United Kingdom (7%).Canada, Germany and Japan each account for 4%. 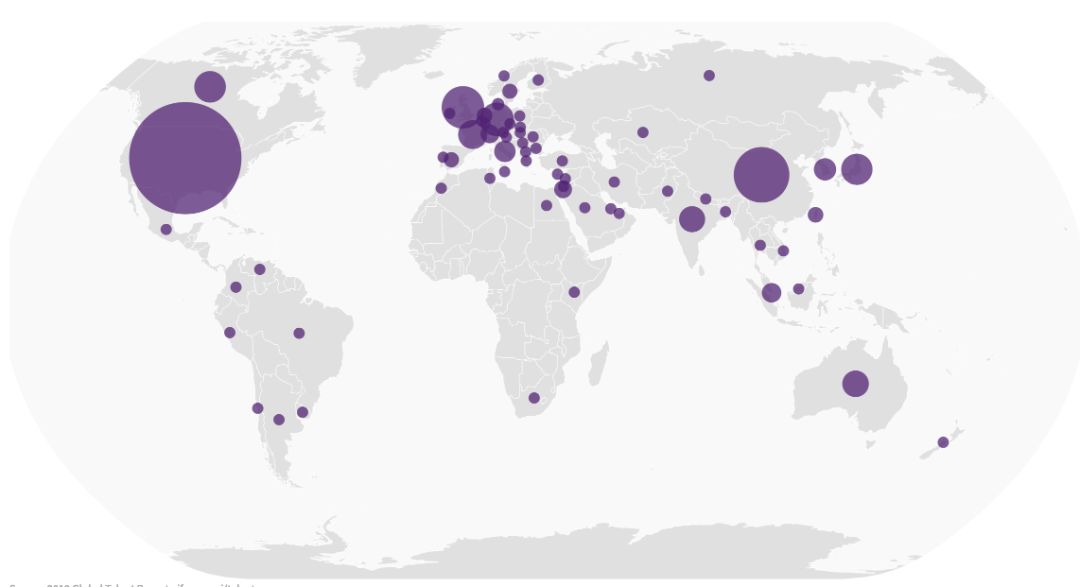 The place where AI experts work. The number of authors in the five countries of the United States, China, the United Kingdom, Germany and Canada accounted for 72%.

In addition, the conference authors work in the academic world (77%) and 23% work in industry.

Cultivating so many AI doctors does not necessarily benefit the country

First The data shows that some countries have a particularly strong appeal to researchers in the field of deep learning. US companies are most likely to attract overseas PhDs to work for themselves, China ranks second, China attracts The absolute number of researchers is about one-fourth that of the United States.

The data shows that the AI talent inflow ratio in the following ten countries or regions is higher than The outflow ratios are: Taiwan, Sweden, South Korea, Spain, the United States, Switzerland, China, Japan, the United Kingdom, and Australia.

Switzerland, Sweden and the UK are ranked in the top three in terms of the proportion of AI talents receiving academic training in foreign countries, with a ratio of 50%, 49% and 44% respectively. 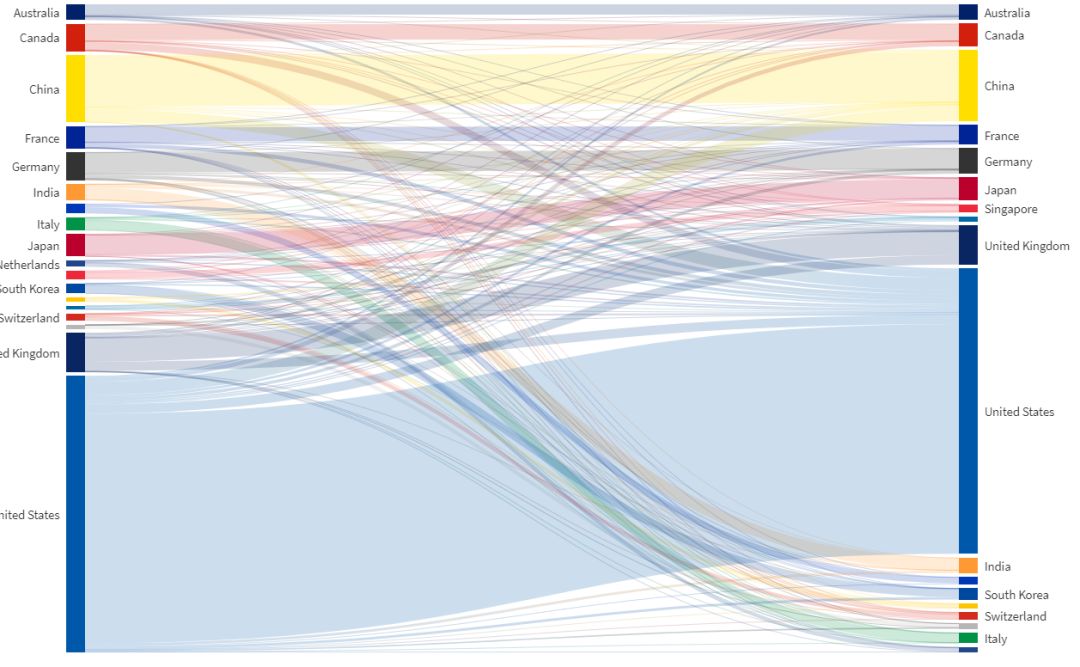 AI talent inflow rate and The two indicators of outflow rate can reflect to a certain extent the ability of a country to attract foreign AI talent and retain local AI talent.

"AI Talent Platform Country": Finally, there is also a category of countries where AI talent outflows and inflows are rising, and these countries are attracting more and more Overseas AI talents, as well as the outward flow of their national doctoral students are also above average. Given the state and trends of these ecosystems, countries in this category include Canada, the Netherlands, Singapore, Switzerland, and the United Kingdom.

Top research is basically monopolized by big countries: the top three in the US, China and Britain

This year's survey found that the total number of authors at top international academic conferences increased by 19% compared to last year. To assess the current impact of these authors in the field, the report analyzes the citations of their published papers in 2017 and 2018:

The research of 18% of the top academic conference authors has had a significant impact on the field, and their knowledge is deep enough to continue to make a substantive impact on the research area. Sexual contributions, these experts may also be a source of potential application talents dedicated to applying theory to the team.

Data shows that these top researchers are more concentrated in some countries. The top five countries are the United States (1095), followed by China (255), the United Kingdom (140), Australia (80) and Canada (45).

The next concern is that the most influential AI researchers in a given country account for the total number of researchers in the country, which may be somewhat Reflects the country's success in cultivating top AI talent.

In this indicator, Australia is among the best, among the country’s AI talents,18% have published high-impact results. This was followed by the United States, the United Kingdom and China (13%), Switzerland (11%), Singapore (9%), Sweden and Spain (8% each), Israel, Canada and Italy (7% each).

In all countries, the most influential research is more likely to come from academia than industry. China is the country with the highest proportion of high-impact research from academia (90%), followed by Italy (86%), the United States (84%), Germany (83%) and Taiwan (81%).

France is the country with the highest proportion of high-impact research from industry (30%), followed by India and Israel (29%), Spain (28 %) and the United Kingdom (27%).

Social Network LinkedIn data shows that a total of 36,524 people have positioned themselves as AI experts in their profile, compared to 22,064 last year.It increased by 66% year-on-year.

Globally, one-third of AI talents use computer science as a relevant subject for academic training

The data shows that these self-proclaimed AI experts have been trained in various subject knowledge. 28% of people have classified computer science as their relevant subject area. In some countries, this proportion is particularly high, including France (47%) and China (44%).

Similarly, in other countries, AI talents have a higher proportion of other disciplines, such as physics: overall, 9% of AI Talent indicates that he has received physics training, but in Germany,This ratio is as high as 28%. For mathematics and statistics, the overall ratio is 18%, but the ratio is 27% in Israel and the United States, and 35% higher in Russia.

However, the limitations of LinkedIn data are obvious.

All personal information and related materials about AI talents on LinkedIn are filled out by the respondents themselves, and LinkedIn is widely used in countries around the world. different. For example, in the United States, there are currently about 144 million people who have established personal information on LinkedIn, accounting for more than 44% of the total US population. In Canada, this proportion is also as high as 38%. In contrast, in Russia and China, Linkedin is not popular, with a population coverage of only 3-5%.

The flow of AI talents: highly international, talent development should be globalized

Overall, in the past year, both the number of authors published in the AI field, the number of high-impact papers, and The number of AI professionals on Linkedin has increased significantly.

The number of women engaged in AI research is still insufficient, but some countries have taken a step closer to the goal of gender equality.

From the geographical distribution of AI talents Look, the United States is at the forefront of the absolute number of almost every indicator.

However, today's global AI field is highly international, each country or The regional AI ecosystem has its own unique advantages and strategic position. The country that focuses on promoting AI professional knowledge construction needs to invest in the global AI talent training required for the development of AI in the future.