On May 6, the inauguration ceremony of the Peony Group Ning'an Smart Engineering Center ("Ning'an IEC") was held in the Wisdom Center Square. Ning'an IEC is the concrete practice of Ning'an Municipal Committee to implement the spirit of the 19th Party Congress, the important speech of General Secretary Xi Jinping and the important instructions, and emancipate the mind to promote high-quality development in accordance with the requirements of the new development concept.

Ning'an IEC consists of an innovation base and an entrepreneurial base, and the innovation base is established. More than ten new technology research institutes carry out technology research and development.Including large-scale 3D reconstruction, digital media art, AR/vr, artificial intelligence/big data, cultural and written genes, intelligent robots and computer vision, smart media, etc. The content includes both the latest cutting-edge technology and cultural technology, all of which are led by doctors who graduated from well-known universities at home and abroad.

From the front end of the ultra high definition video industry to post production, midrange Transmission and back-end display, as the current highest resolution 8K, its technical complexity is beyond people's imagination.

G of 5G refers to Generati On,That is the meaning of "generation". The definitions of 1G~5G, etc. are mainly different from the speed, service type, transmission delay, and various handover success rates. As a new generation mobile communication network, if you use a keyword to describe 5G, it is "fast", 5G download speed is 1000 times faster than 4G.

Nortel Colin combines the rich experience in the intelligent network car industry to integrate the cutting-edge technology with the new bridge TV car as the carrier.Bringing the smart media transmission vehicle project to success, and flexibly bringing the “Super Speed Ultra HD Live Room” to the side, at the focus of the scene, the first time to send the first information of HD!

What can be achieved?

What changes will it bring to the broadcast industry?

The efficiency of TV news broadcasts has greatly improved. At present, domestic TV news programs are mainly recorded and broadcasted, and real live news can be described as rare.However, the news is more about the sense of presence and timeliness. In the reports of major events and emergencies, the live broadcast is more reflective of the professionalism of the media. TV live broadcast, relying on the OB van to transmit audio and video content. Therefore, the economic cost of live news broadcast is relatively high, and most of the emergencies, due to the defects of traditional OB vans, led to serious lags behind the online media in the reporting of major events and emergencies. In the future, if TV news passes the 5G+8K technology TV broadcast car to transmit news, it will inevitably improve the efficiency of TV news editing and broadcasting. Change the lag of TV in news communication. The competition between online video and broadcast TV will be more day-to-day. The factors affecting the viewing experience, such as special vehicles and video jam delays, can be greatly improved through the 5G+8K smart media mobile network. In the future, the superiority of watching ultra-high-definition programs through radio and television may become stronger. 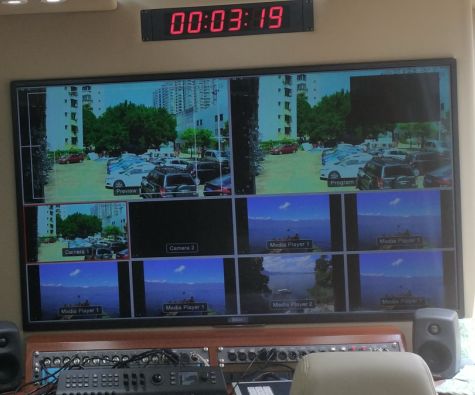