Market research firm IDC said that due to slower smartphone sales and weak demand, global semiconductor revenue is expected to fall by 7.2% in 2019, ending three consecutive years of growth.

Mario Morales, vice president of IDC Semiconductors, said in a statement: "The current market downturn is due to the general weakening of demand and excess inventory in some major markets such as cars, mobile phones and cloud infrastructure. To."

However, IDC expects global semiconductor revenues to pick up in 2020, from 2018 to 2023 The compound annual growth rate will reach 2%.Global chip revenues will reach $524 billion in 2023.

According to IDC's global quarterly mobile phone tracking report released on March 6, the smartphone market continues to face challenges and shipments are expected to decline for the third consecutive year. Global smartphone shipments are forecast to decline by 0.8% year-on-year to 1.39 billion in 2019.

IDC expects smartphones to regain their growth momentum in the second half of this year, with shipments forecasting an increase of 2.3% in July-December. The agency expects the market to bottom out at the end of the third quarter of 2019, and demand will begin to recover gradually.

IHS:The global semiconductor industry is the biggest recession in 2009

IHS Markit pointed out on May 7 that global semiconductor market conditions have deteriorated rapidly at the beginning of this year. In December last year, IHS expects chip sales to grow by 2.9% this year. On May 7, the growth rate is expected to be cut by more than 10 percentage points, and estimated sales will be reduced by 7.4% year-on-year to US$446.2 billion.

IHS said that this means that the global semiconductor industry this year is likely to hit the biggest recession since 2009 (note: nearly 11% fell in the year).

Myson Robles Bruce, IHS Markit Semiconductor Value Chain Research Manager, points out that after the chip industry posted a 15% growth last year,At the beginning of 2019, many semiconductor suppliers were still optimistic that they could achieve moderate growth this year. However, after witnessing the depth and fierceness of the current downturn, chip makers' confidence quickly turned into concern. The latest data shows that the semiconductor market is currently moving in the direction of the biggest recession in 10 years.

The steep nature of the recession is due to the weakening demand and the rapid rise in inventory levels in the first quarter, with some semiconductor products sectors being more affected than others. DRAM, NAND-type flash memory, general purpose microprocessor (MPU), 32-bit microcontroller (MCU) and analog-specific application integrated circuits (ASIC) are the most affected products, the first quarter of 2019 Sales of these products have doubled in annual sales.

The recent DRAM market conditions, the sharp decline in average selling prices and weak demand led to a 2019 DRAM sales forecast being revised down. In the field of NAND-type flash memory, the continued oversupply has caused prices to fall sharply.

Another market that is expected to decline sharply this year is the logical "Application Specific Standards (ASSP)", whose demand is driven by mobile phones. The mobile phone market is difficult to grow due to its almost complete saturation.

The severe market conditions in the semiconductor market are expected to continue until the end of the second quarter. IHS Markit Technology estimates that semiconductor sales will recover in the third quarter, and NAND-type flash memory components for solid-state hard drives (SSDs) and high-end smartphones will be the leader. The MPU for notebook and data center servers is also expected to drive overall semiconductor sales back to growth.

IHS Markit pointed out on March 27 that the recent market sentiment and the sharp decline in average selling prices are expected to cause the DRAM market to fall to $77 billion in 2019, down 22% year-on-year.

IC Insights: Semiconductor Industry in Season 1 2019 The recession is the 4th largest in 36 years 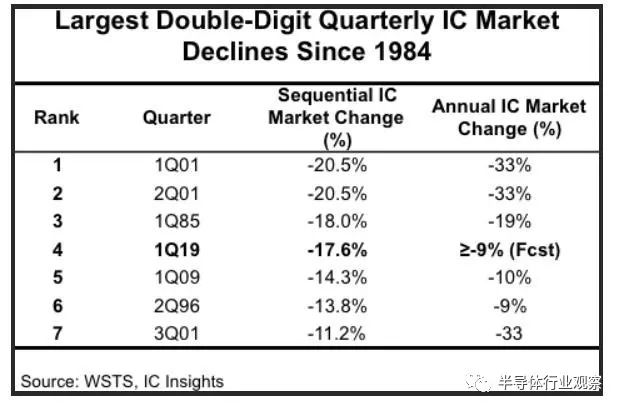 And returning to the analysis of the first quarter of 2019, the report further pointed out that since the first quarter of each year is a relatively weak season for semiconductor industry operations, the statistics of the past 36 years have been The average season 1 will fall by an average of 2.1% from the fourth quarter of the previous year. However, compared with the previous season's decline in the first quarter of 2019, it has exceeded the historical average. Therefore, if we want to avoid the semiconductor industry in 2019. In the case of recession, the overall industry in the second half of the year should be outstanding, so that it is possible to further save the recession.